Now that Kyrie Irving, is the No.1 overall pick of the Cleveland Cavaliers, in the 2011 Draft he has a lot of work ahead of him. The Cavs haven’t had a losing season since drafting (previously first overall) LeBron James in the 2003 Draft. The performance that displayed on the court wasn’t that same fun and joyful atmosphere, Cav fans were accustom to for the past few seasons. They were a bottom basement team that was forced into rebuilding mode. Due to the departure of “hometown hero” LeBron James took his talents to South Beach alongside Dwayne Wade and Chris Bosh.  James hasn’t been appreciated by America ever since, but most critics feel he brought it amongst himself.

There is new star coming to take Cleveland towards championship hopes. In his freshman season, Irving was the highest publicized best player. Even though he played 11 games his stock remained high as the best player in collegiate basketball player, even though Jimmer Fredette captured a following this past dream season at Brigham Young University (BYU). Irving came back in the NCAA tournament to help his team repeat as champs, but they were beat handily by the Arizona Wildcats lead by No.2 overall pick Derrick Williams. For all the things the Cavs fans went through having the No.1 overall pick was finally something to smile about. Team President, Dan Gilbert and management will have to build a competitive team around Irving to take them back to the playoffs and further. During his career he will be in the shadow of LeBron by the fans wanting him to outdo him in every way possible. LeBron basically left a blueprint on how to make Cleveland relevant, and with Irving he can do the same, but he has to do it his way. To all Cavs fans just realize that he isn’t LeBron in any way he’s a bonified point guard with a mix of Chris Paul and Russell Westbrook. He’s a pass first guard with a sweet outside to mid range shot and high free throw percentage from the strike that will get better as his career progresses. With areas to improve in are assists and rebounding.  So when the NBA Lockout ends we’ll see what he showcases. 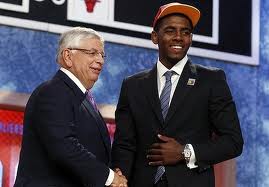